Pennsylvania’s Low Volume, Dirt & Gravel Road Maintenance Program is a pollution prevention program based on local control. Signed into law in April 1997, as Section 9106 of the PA Vehicle Code, the programs purpose is to fund safe, efficient and environmentally sound maintenance of dirt & gravel roads which have been identified as sources of dust & sedimentation pollution.

The Dirt, Gravel, and Low Volume Road Program has been active over the last 20 years with projects in townships throughout Franklin County. The first completed project was Shinabrook Road in Letterkenny Township in the fall of 1999. Since then, there have been many more projects completed in the county on low volume and dirt and gravel roads.

The following pictures show several projects that the Franklin County Conservation District has worked on in the past several years. More projects like these will be completed in the future. 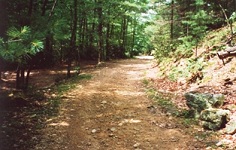 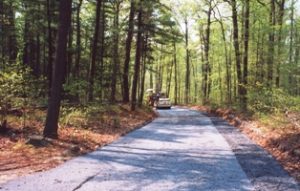 This project in Guilford Township shows the road before and after work was completed. The gravel that is placed on top of the old dirt road is moist so that it will compact better. Notice how much smoother the road becomes after work is done.

The following picture is an illustration of a gravel road being installed in Metal Township, once again note the moisture content of the gravel being used, this helps for compaction when it is rolled. 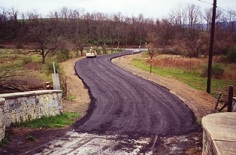